It has been a long time since I have updated this site. After the pandemic hit, I felt like all of my creativity and passion for making things had dried up. Compared to what was going on, art and music seemed trivial and I didn’t feel like doing anything. As time went on and weeks turned into months, I realized that I needed to make art and/or produce something to keep my sanity. Somewhere along the line I realized that these things were not trivial, and were core to my mental health. Still, there is that misanthropy and lack of creativity which hasn’t gone away. Forcing ideas is a waste of time in my past experience. So… I looked back at some of the half-finished art that I had been working on but put on hold over the past few years and decided to tackle all of the half-finished projects head-on. At this point in the pandemic, my sanity is still questionable, but at least I feel like doing things and I’m not curled up in a ball. I finished a lot of art and it feels really good. 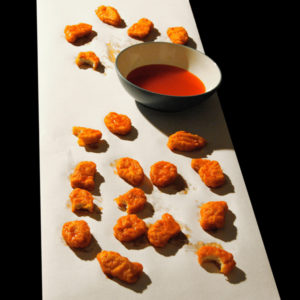 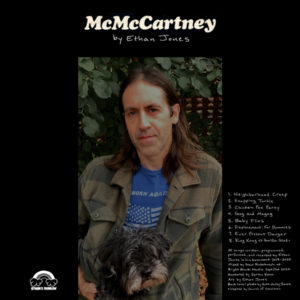 The latest thing I completed is my first “solo album” called McMcCartney.
These songs started as home recordings/demos that I intended to use in a live band. The demos very slowly morphed into real songs and I learned how to program a drum machine. I finished recording the songs several months into the pandemic. Most of the material was written 2018-2020, but a few songs go way back. All instruments were performed and recorded by Ethan Jones(me) using mostly cheap gear, a very slow, out-dated iMac, and one single microphone… a trusty Shure SM57.
The mixing and effects wizardry was done by my friend, Drew Rudebusch, who made this album sound better than it should.
Mastered by Darren Keen.
Listen or don’t. It’s free. Here’s the link to the album:
https://ethanjones.bandcamp.com/album/mcmccartney 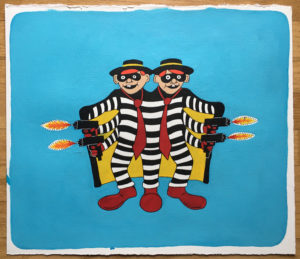 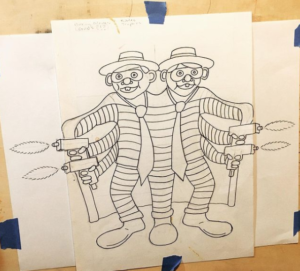 “Invasion McUSA”
Acrylic on Paper. 2020.
This was a fun one. I started this drawing a long time ago, but it sat in limbo because I didn’t know what to put in the hands of the conjoined-twin Hamburglars. Somewhere I saw the poster or DVD cover to the Chuck Norris movie, Invasion USA, where he is looking straight ahead – blasting off flaming Uzis in each hand. That was all of the inspiration I needed. 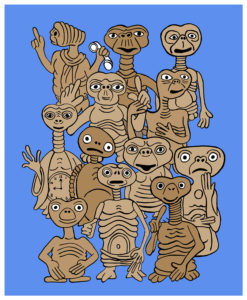 “Bootleg Space Friends”
Ink on paper. 2020.
All of these space friends started out as individual sketches and were modeled after real bootleg toys that I found photos of on eBay. 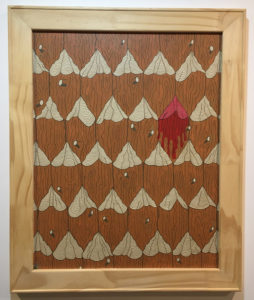 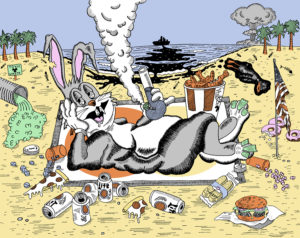 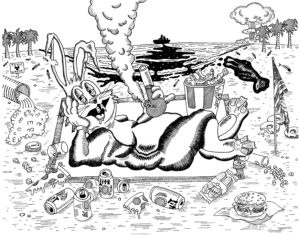 “Endless Bummer / Who Cares?”
Ink on paper. 2020.
This illustration was originally supposed to be the album cover for a sweet band I played guitar in called Dumb Beach. Most of the time we had 2 drummers with matching drum kits, bass player, and 3 guitar players, 2 of which had matching amps. Dumb Beach was Omaha’s best symmetrical party band and the funnest band I have ever played in. We recorded most of a full-length album, but ended up pulling the plug before it was completed. While being cooped up during Covid I decided to finish the illustration. It’s pretty dumb, as intended. Maybe I’ll make some prints someday. I’m posting both color and black and white versions because I don’t know which I like better. Leaning more toward black and white. 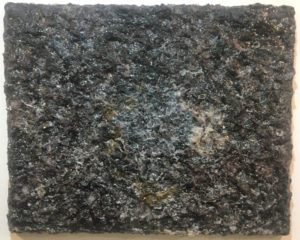 “Untitled”.
Dryer lint, Mod Podge, and contact lenses. 2020.
This was a continuation of the “trash art” I was really into making at the time. This was the last piece before I moved on to drawing and other things. For many months, I saved dryer lint and my used contact lenses. Saving my used contacts really grossed my wife out, but I tried to reason, arguing that this piece would go a lot faster if she saved her contact lenses for me too. She was not on board. As for the dryer lint, I have 3 kids, so I do a lot of laundry. At some point I began to notice many different colors, shades, and textures of dryer lint so I started collecting it in a bag every time I did laundry. This turned out to be a really strange piece. I had no idea what all of these trash items would look like when mixed with glue or if it would be a complete failure. This piece was a challenge and unlike anything that I have done before. I am pleased with the way it turned out, but will definitely NEVER try anything like this again! It is very heavy due to the layers and layers of Mod Podge used to cover the dryer lint and contact lenses.
Here are some photos of the process: 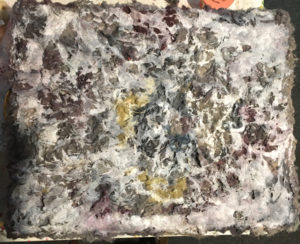 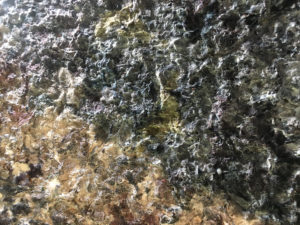 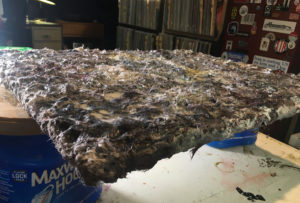 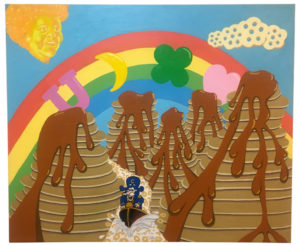 I finally finished this ridiculous painting that has been in the works for several years. I can’t count the number of times I have painted over parts of this composition. I’m calling it “Manibreakfast Destiny”, which is styled after the westward expansion landscape paintings from the 1800s… only with breakfast foods instead of rivers, trees, mountains, etc.
Anyway… it’s for sale in my webstore and it would look great in your breakfast nook. 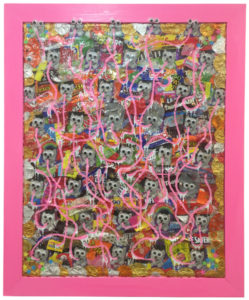 I had so much fun making my first trash art piece, “Hail, Cesar Dog Food”, that I decided to make a 2nd piece in the same style. The genesis of the new piece came right around Halloween 2019 when I started to find Halloween candy wrappers all over my house. That, and my 2 elderly little dogs continue to eat tons of Cesar Dog Food and the foil wrappers from the containers quickly accumulate. Eventually I had enough interesting trash collected to start a new piece.

The great thing about this type of art is that there isn’t any right way to do it. Each piece takes a long time to make because they are created over a long period – bit by bit, working in layers and adding different elements until I feel like it’s done. Last night, I finally felt like the new piece was complete… so I present to you “Cesar Dog Food: Halloween Edition”.

As an artist, I try a lot of different ideas…. some work, most don’t. When I find something that does work that I enjoy creating I tend to stick with it; such is the case with my red meat collages and now the dog food trash art. This new piece will be the last of its kind and it is time to move on to something completely new. Maybe future art historians will look back and refer to this time as my “Dog Food Period”.

Anyway, I have added “Cesar Dog Food: Halloween Edition” to my web store where you will find it along with some other of my creations for sale and priced to move 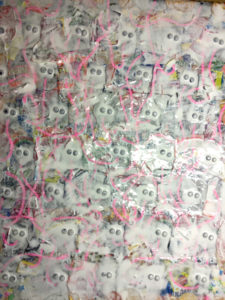 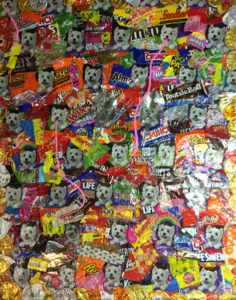 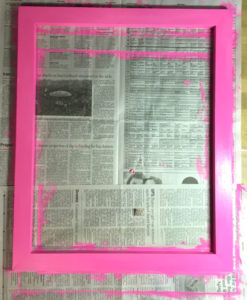 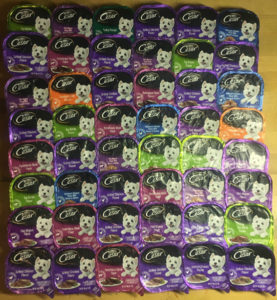 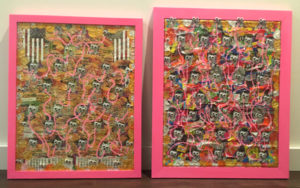 As far as music goes… I have been listening to a lot of The Fall. Particularly, “This Nation’s Saving Grace”, “Bend Sinister”, and “I am Kurious Orange”. I am a huge fan of the band and like most of their huge catalog, but I think my favorite period is the lineup with Brixe Smith on guitar, Steve Hanley on bass, and Paul Hanley and Karl Burns on double drums. Last year I read ex-The Fall bassist Steve Hanleys book, “Life Inside the Fall”. If you are a fan of the band, I highly recommend you read it.

Greetings and welcome to my website.
Here you will find a portfolio of my work, current projects, and a store where you can purchase my wares.

So for now… take a look around my website, buy some art, or hit me up if you are in need of illustration, design or commissioned work.

I listen to a lot of records and I’m a huge music nerd, so I might even post about what albums I’ve been enjoying while I make art. 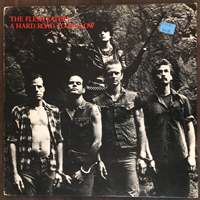 Flesh Eaters “A Hard Road to Follow”
Upsetter Records. 1983
I’ve been listening to this album online for months and finally tracked down a vinyl copy. There has only been one pressing of this album in 1983, so it was fairly hard to find. This is the Flesh Eaters finest album in my opinion. It is an incredible record all the way through and something I can listen to over and over without getting burned out. 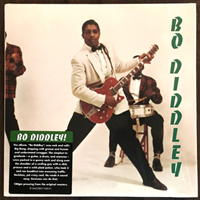 Bo Diddley “Self-Titled”
Chess Records. 1957
I just bought this record a couple of years ago and listen to it constantly. It’s one of those albums where I can’t believe I was 40 years old before I heard it and truly feel my life would be different if I had owned it as a teenager. Many of the riffs sound familiar because countless artists have borrowed from Bo Diddley.